Crime shows have always been popular entertainment. Even the old Andy Griffith Show had a theme centered on the hometown sheriff and his jail. Now we have CSI Miami, Las Vegas, and New York and multiple other crime-investigation/ courtroom dramas that are on every night of the week. Every now and again, the topic of making bail comes up. Even though you might not think that making bail will ever apply to you, you might want to know the steps in making bail that you will go through if it does. (Just a hint: No matter who you are, it could easily come up.)

The first thing that usually happens is a police officer places you under arrest. It doesn’t matter what it is for. It might be a DUI or some incident you forgot about like failing to show up for that hearing. It also doesn’t matter if you are guilty or innocent, your arrest starts a ball rolling that can’t be stopped until it reaches a certain point. Go ahead, argue and make a fuss. That’s usually good for extra tight handcuffs and a bump on the head when they put you in the back of the squad car.

If this is your first time, try and enjoy it. Hopefully it won’t happen again, but a new experience shouldn’t be squandered. Look out the windows and try and guess where you are going. Try to ignore your numb hands and aching wrists. Try to relax and not get overly concerned about all those meetings you will miss. At least you aren’t in the back of an ambulance.

When you arrive at the county jail, they will probably leave you in the back seat until they are ready to enter you into the facility. At this point, you are in a very secure garage. If you are lucky, when they help you out of the car they might take your handcuffs off or at least move them from the back to the front. They then take away everything but your clothes and put it in a large labeled plastic bag. Without your wallet, purse, cell-phone, jewelry or anything else, you almost feel naked.

You are next escorted from the garage into the main reception area of the jail which looks a lot like a big nurse’s station at a hospital, except all the nurses are in uniform and look like they could drop you with one punch. If there isn’t a line, you stand in front of the counter while they determine your crime, your bail, and if you have any other outstanding warrants. These days they even check a Federal database to determine if you are a suspected terrorist or not. Don’t try to joke with this person. Their sense of humor was surgically removed. Your zingers will bounce off and fall to the floor. 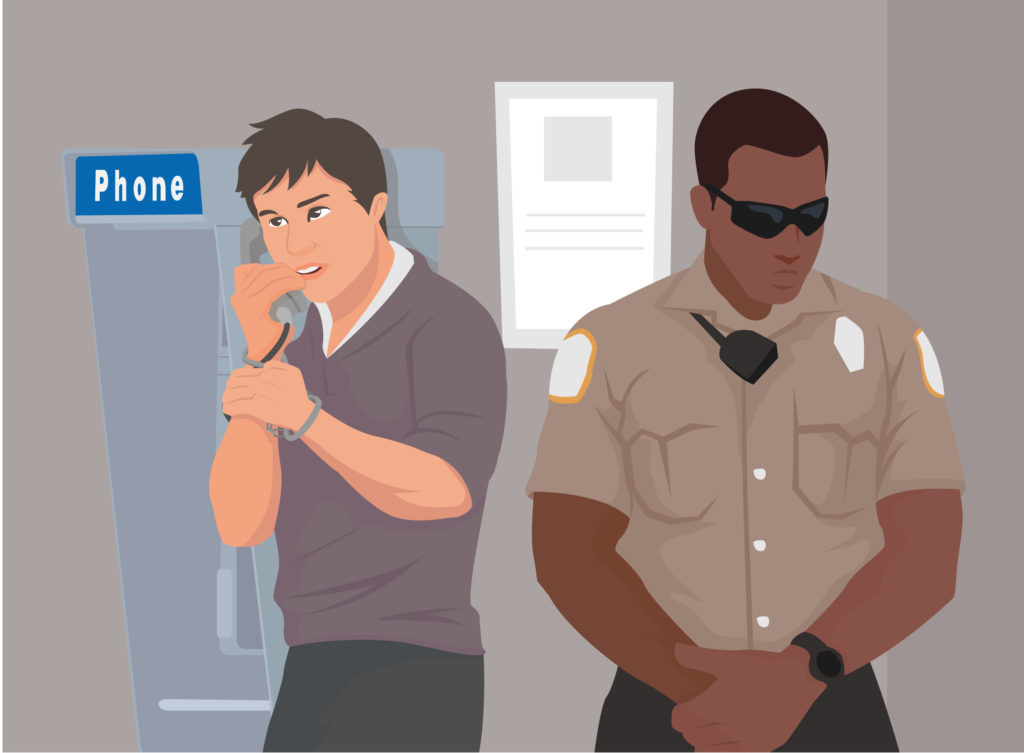 Now that you know your bail is set at $5000 cash, your next task is to find someone to bring it to you or find a bail bond agent who will take your case. Either way you need to come up with some cash, either $5000 for the bail or $500 for a bond. If you are still living at home with Mom and Dad, now is a good time to give them a call. Let’s see, Mom is #2 on your speed dial and Dad is #3. What are their numbers? They took your cell phone and the only phone available is in the waiting area, a pay phone. You could call collect if you could remember any phone numbers. Besides, the operator will tell the person you call that the call is coming from you, in jail, and it is about $5.00 a minute.

Step #6 is a continuation of #5 because this step can drag out and become frustrating. If everyone you know has a cell phone, you can’t call them collect. Your parents took out the home phone last year. Now what? Your parents don’t have $5000 laying around either. You might as well call Bail Bonds Direct. If your jail is typical there will be 25 – 30 stickers surrounding the phone with toll-free numbers to nearby bail bond agents. As mentioned before, save yourself a headache and find the number for Bail Bonds Direct. They will get a hold of Mom and Dad and get the ball rolling.

Some time during #5 and #6, someone will ask you to step over to a little machine that will electronically take your fingerprints. This way you are entered into the national fingerprint database within minutes rather than months. Next comes your mug shot. A mug shot makes a driver’s license photo look like a Hollywood glamour shot. Don’t bother smiling. To add insult to injury; when you don’t show up to work for a few days, that guy who wants your job can go to the Internet and pull up your mug shot to show everyone at work where you are. He may even print it out and post it around the office.

It is important to know that every jail is different. Some jails put you in a holding cell right away and you need to ask to use the phone. Others have a waiting area with a yellow line that you aren’t allowed to cross. Some jails stick to the one phone call rule while others don’t want you there anyway and will allow you to call until someone comes and bails you out. Regardless, while you wait to see if you will make bail or not you get to spend time in a holding cell. Some are small, designed for 5 or 6 people, while others can hold up to 20. The jail personnel would rather you have your own private cell to avoid trouble, so don’t blame them. A holding cell doesn’t have a clock, and usually you can’t see one from the door. That is because time stops in a holding cell. Minutes seem like hours.

If you are in the holding cell during mealtime, they will feed you. As you sample the carefully prepared cuisine, your motivation to make bail will increase exponentially. You thought torture was illegal but it evidently doesn’t include the thrice-daily abuse of your taste buds. Depending on the jail, this may very well be a deliberate attempt to encourage you to make bail.

Congratulations, your parents came through. They hired Bail Bonds Direct and you will soon be free. Just sign here, and here, and here. Your court date is on this date. Show up or we will come get you. Don’t be surprised if you get your wallet back empty. The $300 in your wallet just went to those back taxes you owe the state.

We hope this experience was miserable for you, because even though you may think that your jailers were sadistic jerks, they don’t want to see you again either.