The issue of the legality of bounty hunting across the states has been brought up again, although this time in the northern state of Wisconsin. Republican Governor Scott Walker has recently vetoed a bill that allows for the existence and employment of bounty hunters in Wisconsin, the second time in two years he has taken this action. It has been met with mixed emotions by proponents of both sides, and once again stirs up the debate surrounding the legal and ethical nature of bounty hunters. 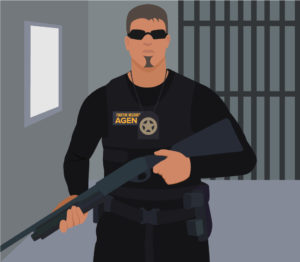 If you have ever seen the original Star Wars trilogy, then you might remember the character Boba Fett. An intergalactic bounty hunter, he is employed by various factions to capture and deliver prisoners who have escaped from their detention.

While they may not wear armor and carry blaster pistols, bounty hunters on Earth can be just as menacing when performing their work. Bounty hunters are generally hired by bail bondsmen to pursue and bring back individuals that have skipped their bail. While they are required to follow all rules and laws regarding detaining an individual, they are often times extremely smart, cunning, and deceptive, and will do almost anything to capture their target in order to get paid the full amount.

While the practice is widespread throughout the US, some states have outlawed bounty hunting, although this is generally the case in the states that have similarly outlawed the existence of a system of bail bondsmen.

In a majority of the United States, though, the use of a bounty hunter is legal when pursuing an alleged criminal that has skipped bail. While this differs across the country, bounty hunters often do not have to undergo any formal training to begin employment, and are only required to carry a sanction from their employer, the bondsman. Most areas allow bounty hunters to enter the premises of the fugitive without a warrant, as long as the entrance is for the purpose of a re-arrest.

The only true restriction for bounty hunters is in the pursuit of international fugitives. The United States is one of the only countries in the international arena that condones and supports the use of bounty hunters, and a hunter pursuing and arresting a non-citizen is considered a breach of international law, and can result in serious backlash for the hunter and his or her employer. Bounty hunters must be extremely careful to ensure that they are following a legal framework when performing their work.

What This Means For You

Dealing with a bounty hunter in the United States is not pleasant. These cunning individuals can track you down in short time, caring only about the payoff they will see once you are behind bars again. And unless you aren’t a citizen of the US, you can be subjected to their pursuit and capture at any time.

There’s a simple fix for this, though: don’t jump bail. Stick with your bondsman, let them do their work, and revel in the fact that a bounty hunter isn’t hot on your tail.