The morphing of the English language to be less gender specific somehow hasn’t changed the word bondsman to bondsperson in common vernacular. Consequently, to be politically correct you might want to refer to a bondsperson by their proper title, “Bail Bond Agent.”

An Agent of What? 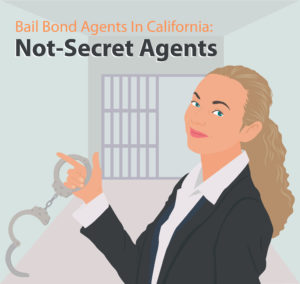 A bail bond agent isn’t James Bond; it’s not that kind of agent. A bail bond agent is more like an insurance agent. They represent a surety company that guarantees your bail should you decide to do something we don’t recommend like make a run for it. As an agent of the surety company, they are able to sign the bond that signifies to the court that they will cover your bail. So, if your bail is $10,000, your bail bond agent will want you to assure them that you will show up for court because they are signing a document on your behalf worth $10,000.

Show Me the Money

So where do they keep all that money? The bail bond agent doesn’t have that money laying around. The bail bond industry is based on promises. The bail bond agent is authorized to make promises to the court on the behalf of the surety company and you. The surety company promises to pay the bail if everything, (meaning you) heads south. You promise that after you pay your fee, you will keep the rules and show up for court. If everything goes right, everyone, especially you, keeps their promise and the system works great.

Your Money or Your Life

Let’s assume for a moment that you are guilty . . . did you really fall for that? Nobody is guilty until a jury says they are guilty. There is guilty and then there is guilty. One carries a fine and maybe some jail, the other kind of guilty means you are pronounced innocent and you get to go home. Your attorney does this for a living, he or she will give you your best shot. You may think jumping bail is a good gamble. If you think so, then you should sign up for the Publishers Clearinghouse Sweepstakes and win a million dollars a year for life. Oh, except you won’t have an address where they would present you with your giant check. Skipping bail is like stealing your own identity and then throwing it in the shredder.

Bail gives you an opportunity to work with your attorney and get your life back. Skipping bail is breaking your promise and tossing your life away. A bail bond agent is like James Bond in one way. They will find you. They would prefer, however, to be your friend and help you out of your situation.